Angus’ birthday was a couple days ago – he is 9 now!!! I still remember the first time I saw him like it was yesterday and the first time I held him. I was instantly in love with him and knew we’d be best friends. He’s my first baby and he’s been through SO much with me over the years. So many heartaches, so many joys and big changes. He was always there to lick my tears away when I was sad, and to celebrate with me when I was excited about something. Oh Angus, I love you so much buddy.

So in celebration of his birthday (and Zoey’s birthday from last month too!), we ordered a little dog cake from this cute store I came across last month near us: Reese’s Barkery. I love this place! They are a dog bakery plus a small pet store but they don’t sell any animals, just supplies. They also don’t sell crap, they just sell the really good stuff, and the couple who own and run it are locals and they are super nice and knowledgeable. (and apparently their daughter also has a pet pig who lives in the house just like Norman! He’s a lot bigger though, over 100 pounds! yikes! and their pig sleeps on the couch too, haha!). I will gladly shop at this store rather than the big box stores! Support the small businesses for sure. One place we never set foot in is Petland. No way jose. That place is awful and sells puppies. We won’t shop at any place that sells puppies (unless they are adopting out rescues) as it’s obvious they come from puppy mills. Terrible. Can’t believe these places are still in business.

Anyway, we got our little cake for the 3 dogs and Norman to share – it’s a carrot cake. That was an easy decision as all of them love carrots. But of course what’s a party without cake for us too? 🙂 I made our favorite cake: Angel Food with a vanilla cheesecake frosting. YUM! Steve and I don’t need an excuse to have Angel Food Cake, and this is one cake that Steve will never turn down. (he isn’t a big one on sweets.)

The dogs and pig all enjoyed their cake very very much, as we did with ours! 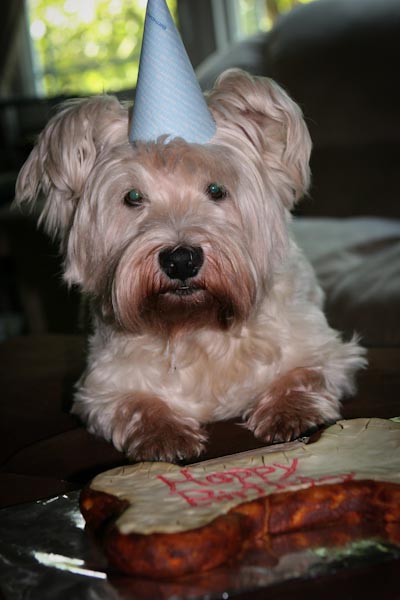 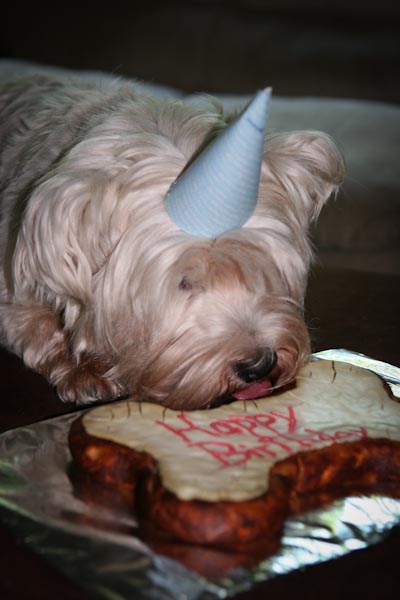 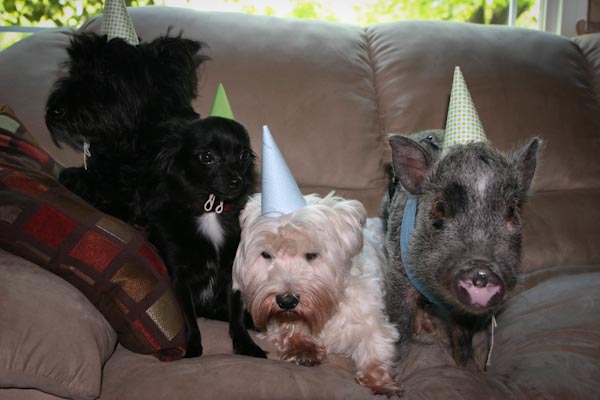 The party-goer’s! Don’t they look thrilled? It’s so hard to get a group photo of the 4 of them, especially when there is a cake sitting on the nearby ottoman. I can almost read their minds in this photo: (from left to right)  Zoey “You guys are seriously cramping my laying time on this pillow”, Moose “Why am I wearing this hat….oh!! Is that a toy over there on the floor?”, Angus: “Darn it Norman! You’re stepping on my leg!”, Norman “I smell cake! I see cake!” 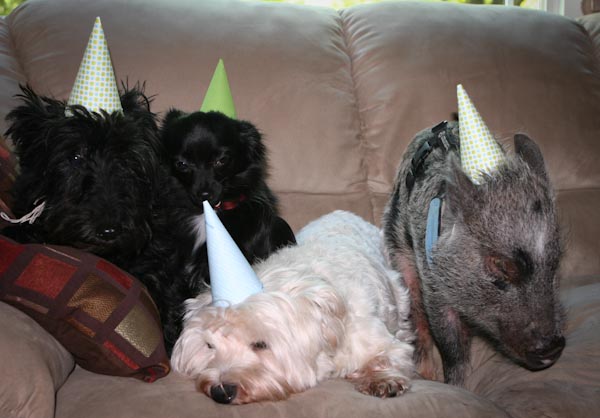 Angus has given up at this point. 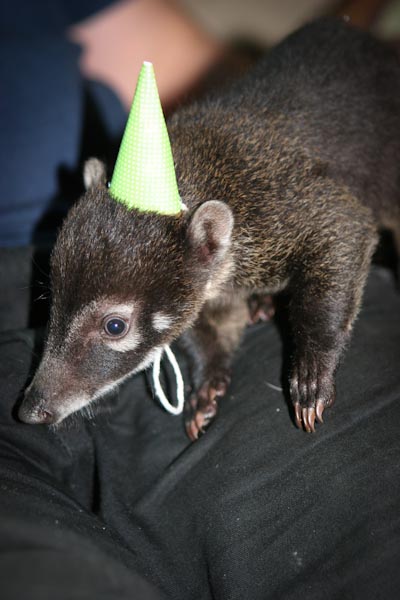 Even baby Twitchy got in on the fun, although he didn’t get to have any cake. 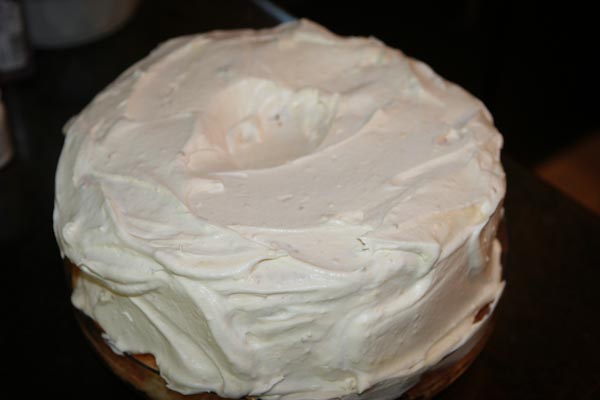 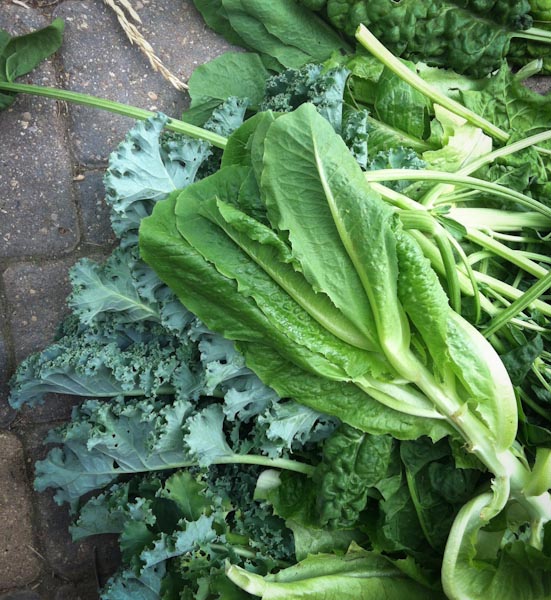 The other animals got a special treat today too! Fresh picked romaine, spinach and kale from our garden!!! I LOVE having a vegetable garden! I walk Norman over to it every morning and we share a few fresh picked strawberries or peas.:)

In other news this week: Steve and I actually got away for a couple days. Well ok, a couple nights but really only 1 day. We went up to the Wisconsin Dells for a quick getaway. I guess some people refer to these last getaways before their baby is born a “BabyMoon”. LOL. Yes this makes me laugh cause as if you can escape the reality that this baby is almost here. Sure you can go for a getaway but is there a whole LOT of stuff you can do when you’re 8.5 months pregnant? The Dells has loads of waterparks and amusements parks but guess what? I’m 8.5 MONTHS pregnant!!! I can’t go on any of the fun rides or any waterslides, plus once again, I’m pregnant so do I WANT to be running around a waterpark? Whale in the pool – look out!

What we did do was fun though. We got there after dinner on Monday so we walked around the main strip in town where all the touristy stores are and we were basically just typical tourists. It was fun though and all the stores were open late which worked out nice for us. Then we found this place called Wizard Quest and it was amazing! It’s hard to explain but it was like being in an adventure/real life video game/ scavenger hunt kind of thing. We had a blast!! We went late – at 9:30 and stayed until after they closed at 11pm. We enjoyed it so much that we went back the next night too. There was some physical activity involved as well as mental, but as long as one person on your team can do the physical stuff then you’re good.  Yay for Steve as there was no way I was sliding down huge tube slides and crawling through tunnels and stuff.

The next days we rode the Wisconsin Duck Tours. You know those old army vehicles that can go both on land and in water? Yep those. It was fun and we saw a lot of gorgeous scenery. The seating was really cramped though, hardly any leg room at all, I had to sit sideways cause my legs are too long. Then we went mini golfing at an awesome place called “Pirates Cove”. They had 7 different courses I think. It was huge! We did the 2nd most challenging course and I won! Woo! I haven’t won a game in so long. Maybe I should play more mini golf while I’m pregnant!

Later in the afternoon we went back to our hotel (which had both an outdoor and indoor waterpark) and we spent an hour and a half floating around in a double tube through the lazy river in the indoor waterpark. It was amazing! I was just happy that I was able to get myself into the tube so easily as I imagined it would be a lot harder. Steve did have to sort of dump me out of it when we were ready to leave though, lol.

Anyway, we did actually have a fun time away, and we crammed a lot of stuff into our time there. We missed all the animals like crazy though but we were getting regular text updates from our good friends who were house-sitting for us. 🙂 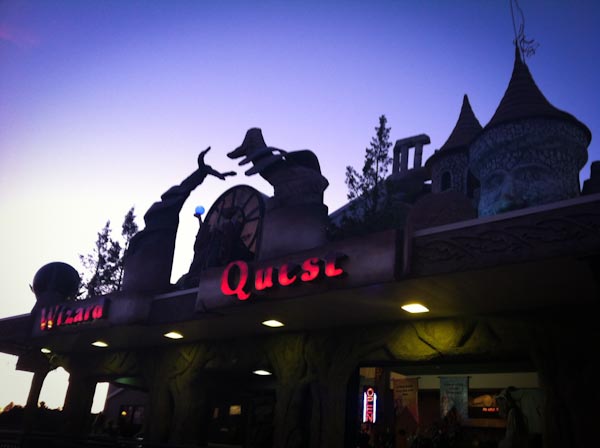 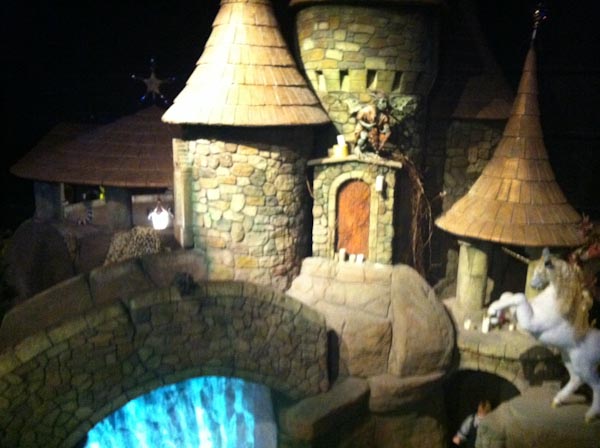 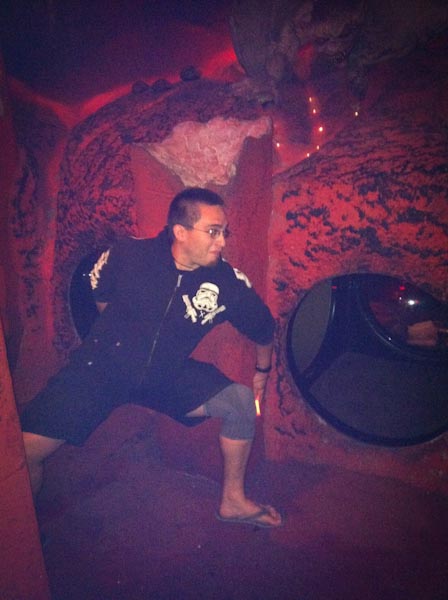 Inside Wizard Quest, Steve being funny 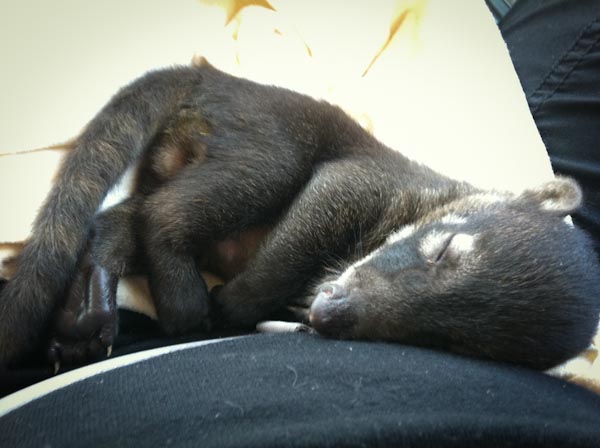 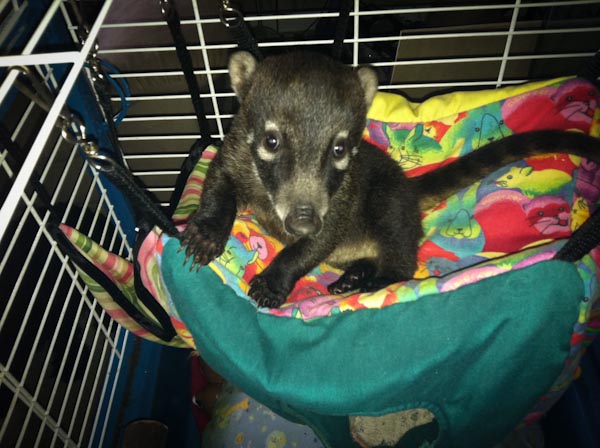 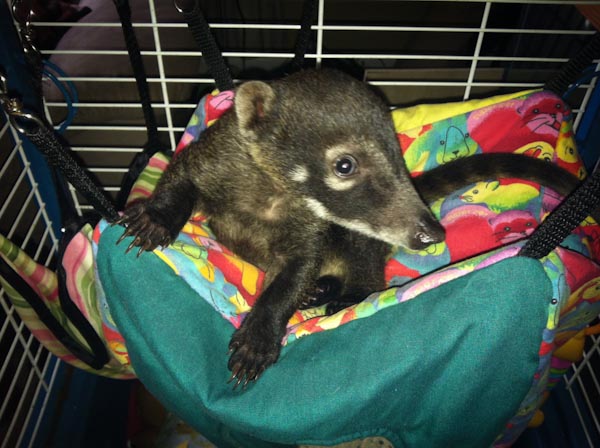 Who can resist this cute face?