Since I haven’t blogged this past month I thought I should follow along in Stephanie’s footsteps and participate in a Blog Your Heart Out post. Why not? 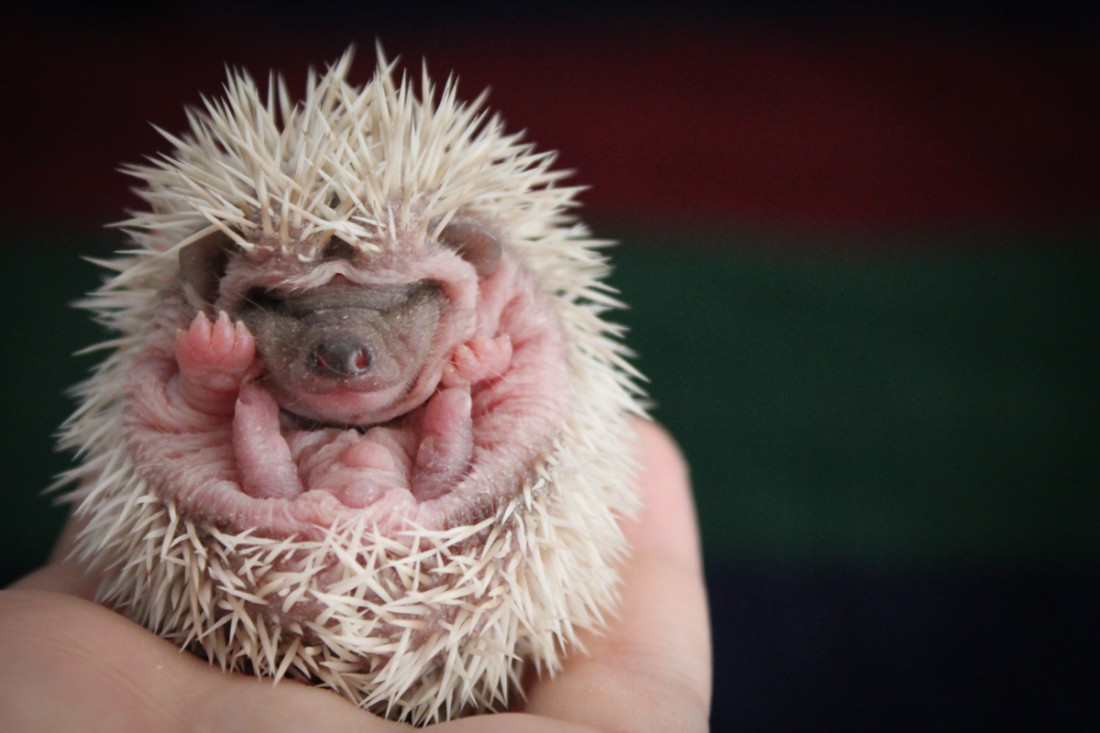 Here is my random photo: one of our baby hedgehogs. We now have 6 hedgehogs and we’re keeping all of them. 🙂

1.  One of the newest things Ava has been saying this week is “Ready…Set…Go!”. It’s pretty hilarious. To us anyway. 🙂

2. This past month has been rough. Ava has been sick for over a month and this past week both Steve and I have been really sick too. Never before has it hit me more how incredibly hard it is to be sick and have a sick baby at the same time. I know this is just the start of it, but when you get no sleep at night, your battling a fever & nausea and all you want to do is close your eyes and pass out… but you can’t cause you have a tiny human to look after still. And a whole whack of animals too. I so wish we lived closer to my parents. I don’t think I’ve ever felt so lonely and secluded as we did this week. Ok enough whining, moving on now.

3. An embarrassing amount of dishes had accumulated in the sink from the previous 2 days. Really though, the last thing you want to do when your head feels like it’s going to explode is stand in the kitchen washing dishes. Since I was feeling much better yesterday I managed to tackle this task and then I continued on a cleaning spree throughout the entire house. It felt really really good.

4. While doing the dishes, Ava was playing happily with her Leap Frog magnets on the fridge and the dogs & Norman kept asking to go outside. I was constantly letting them all out and then in again almost right away. Norman is the worst one right now. He hates the snow and cold and does not want to go outside at all right now. I don’t know if he keeps forgetting its cold outside or if he is succumbing to peer pressure from the dogs but he is right there with them begging to go out. However, as soon as he gets outside he turns around and starts banging on the door to come back in. Yes, he actually bangs on the door. He gets up on his back 2 legs and throws himself and his 2 front piggy hooves right into the door. I’m actually a little surprised he hasn’t busted that door down by now, he’s so darn heavy.

5. We have so much snow here now that it’s almost taller than our dogs. Crazy. They don’t seem to mind though and they have made a nice path for themselves all the way through the yard over to the fence where they bark at our neighbors dogs. Steve has cleared an area for them all near the back door but they still have to run over and pester those other dogs.

6. Bananas. All Ava wants to eat right now are bananas. She asks for them all day long. Then has a meltdown if we say no, but we can’t let her have endless bananas. Clearly she does not get her love for them from me.

7. High Fructose Corn Syrup. I was super disappointed lately when I went to give Ava some infants Tylenol and I saw that it contains HFCS. Really??? Why?? I try not to give her anything with that crap in it and something I trust like Tylenol contains it. However now that I check labels for everything, I found that the Up and Up Brand from Target (equivalent to infants tylenol) does NOT contain HFCS. And it’s dye free as well. Win-Win. Thank you Target. I suppose I will forgive you for the giant hassle last month with the security breach of our red card.

8. Coconut Oil: I can’t say enough good things about this stuff. I have officially ditched all kinds of face creams and I now only use coconut oil. In the past I have tried them all: all natural creams, expensive creams that promise stuff they never delivered, extra sensitive creams, etc. Now that I have been using the coconut oil as my only face “cream” for months now, I can safely say that it’s wonderful. I have had only 1 blemish in the last couple months, whereas I was getting numerous ones continuously with all the other creams I used. Plus there are no chemicals in this stuff so I feel much better about putting it on my skin. I buy the organic kind and a little goes a long way – this stuff lasts for so long so for the cost – it is really really cheap. I have one jar in the bathroom that I use for my face, one in Ava’s room that I use as diaper cream for her, and one in the kitchen that we use for cooking. Awesome awesome stuff.

9. I haven’t done any giveaways on here for awhile so I’m going to get one up here soon – for some scrapbooking supplies and a copy of my book.

10. I have been working on a bunch of new toddler friendly recipes so I will get those into a post within the next couple days. I have also created some yummy family dinner recipes that are healthy and low in sodium. 🙂

11. It’s February already. How the heck did that happen?