A monkey? Nope we did not get another pet, lol. (Although I have always wanted a monkey…..). Last week Brent got to do something VERY cool- he got to go spend the day working on a movie set with the ambulance (just in case someone got hurt doing stunts). It was the filming of Night at the Museum 2 (staring Ben Stiller and Owen Wilson). While he was there he got to hang out with a couple monkeys that were also staring in the movie – this one capuchin monkey named Crystal has stared in many movies including the first Night at the Museum, both Dr Doolittle movies, Indian Jones and others. 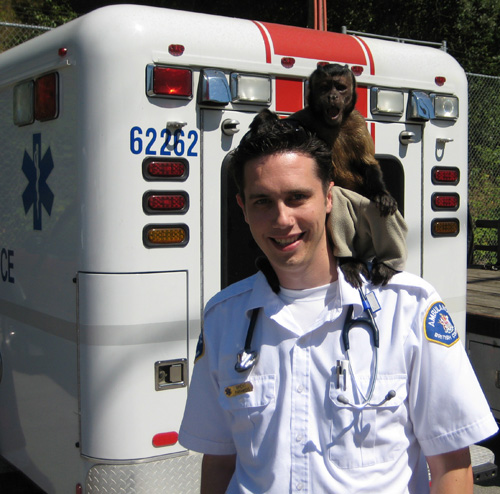 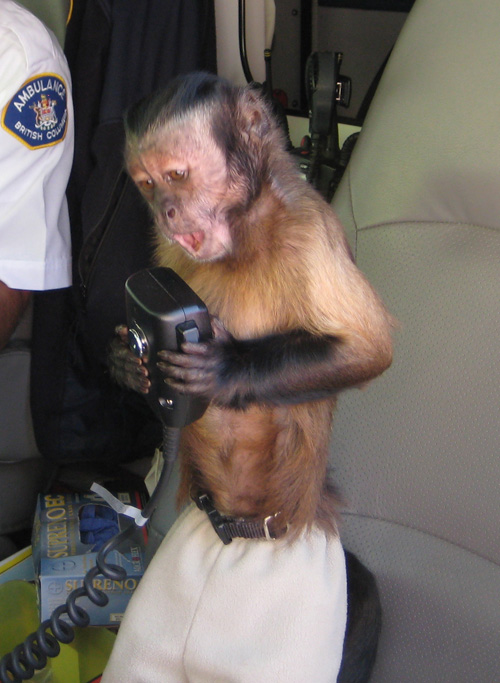 Crystal talking into the ambulance mic (it’s official, even a monkey can do Brent’s job! lol! j/k) 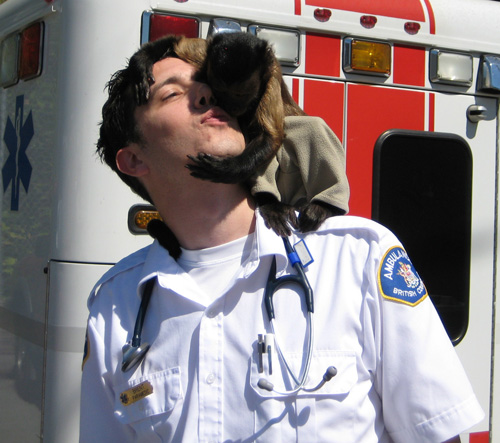 Crystal giving Brent a kiss. I am so jealous!! I wish it was me who got to hang out with the monkey all day!!

Alright moving on….. here are a couple new classes I will be teaching at Precious Memories: 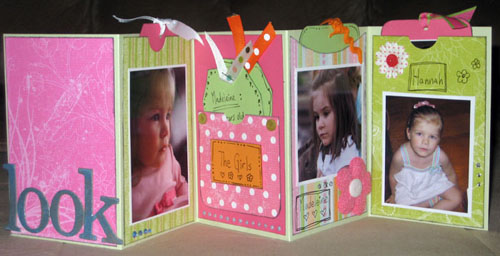 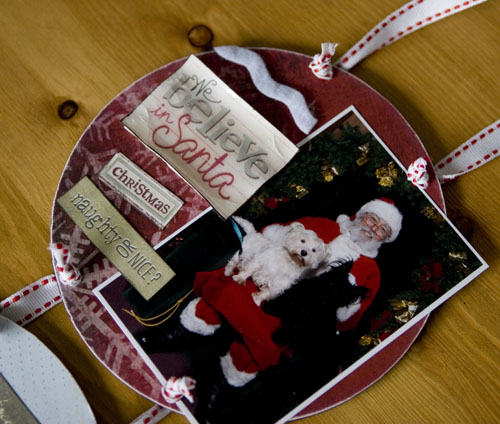 I got some awesome news today….. I will be attending Ranger U in October! Yay! My first time in New Jersey too!

Here is a quick recap of my Toronto trip last week with Nicole. We went to exhibit (Tilano) at the Toronto Gift Show. The show was ginormous – we didn’t even see a quarter of it! I think the funniest thing that happened was our elevator story. Our first day there, we were just coming back to the hotel and walking towards the elevator when I asked Nicole what time the show went until the following day. She answers me just as we enter the elevator “seven” but she said it in a tone that was like ‘ugh, seven…’ cause it meant it would be a long day. So we’re standing in there and a couple other people were there as well. As the elevator starts to go up, I was like “oh we forgot to push our button” and I reach over and press the 4. The man who was standing right beside the buttons says “oh I thought I heard you say seven so I pushed that one for you”. Nicole and I both looked at each other totally confused and when we got out of the elevator and were walking towards our room, we suddenly realized he heard Nicole answer me “seven” and thought she was telling him to push seven!! Of course we laughed hysterically but also felt really bad cause now that poor guy must think we are total snobs!!! The next morning when we got to the show – guess whose booth was right beside ours? Yep – the elevator man!!! lol!! Too funny but at least we were able to apologize to him and assure him we were not snobs! He and his wife were really cool and we got to know them quite well over the duration of the show. 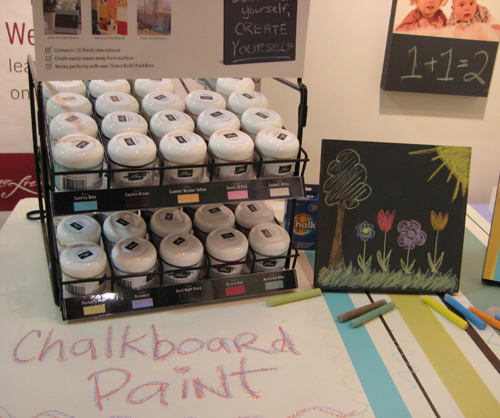 I love love love this chalkboard paint!! And yes that is my beautiful chalk artwork on the right there, hehe 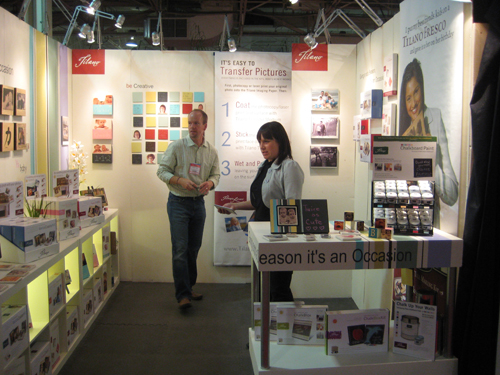 Randy and Nicole finishing the set up 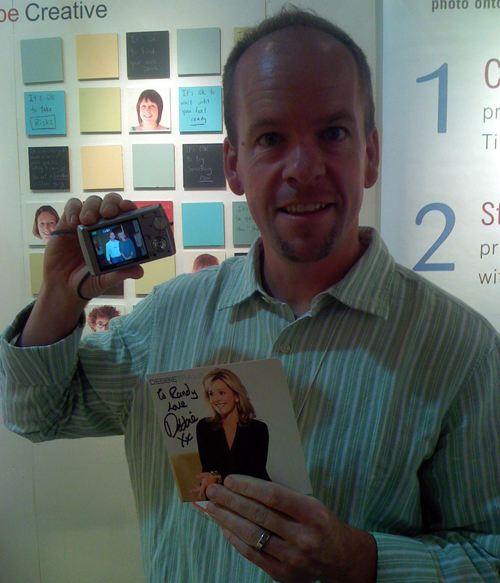 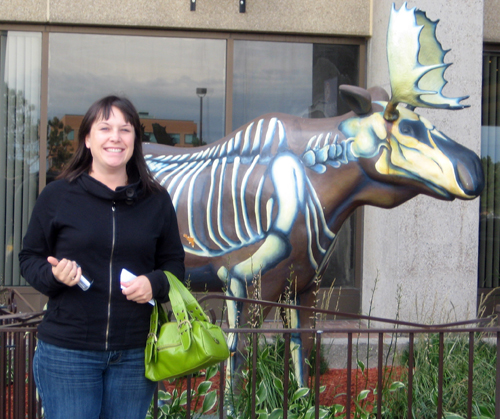 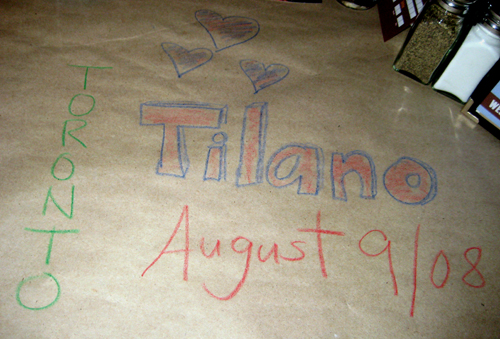 At Jack Aster’s Restaurant – such a cool place!! 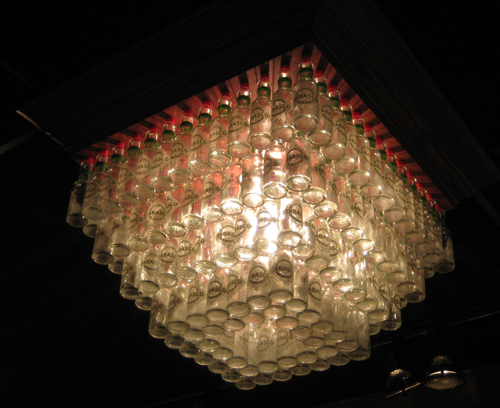 Chandeliers made of Tabasco bottles 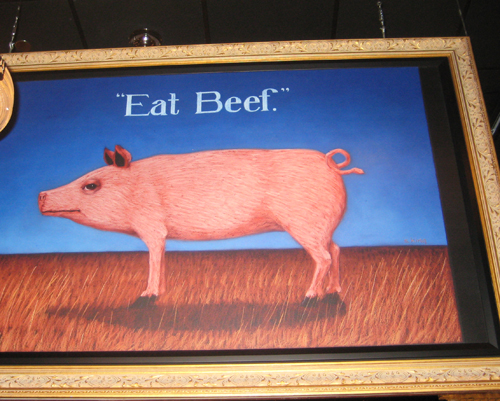