Yesterday was my mum’s birthday and we were fortunate enough to be able to come to Victoria to spend the weekend here with my parents. My dad threw a birthday party/dinner for my mum and it was so much fun! When a couple of my parents friends were leaving, they noticed something standing in the driveway in front of the gate, then the gate started to open (it works on sensors) and a cow started to walk into the yard!!! Of course everyone rushed outside to see it and I think all our voices and surprise startled it so it turned and walked back down the driveway towards the road. The odd thing is, there are no farms around their house. Everyone on their street has acreage but most of them back onto the Highlands (which is all forests). This was so odd that there was a loose cow wandering around!! Brent grabbed a flashlight and went after the cow and my mom grabbed a bucket of the food she feeds to the deer (which is meant for cows too I think) and a bucket of water and I grabbed my cell phone then we went after Brent and the cow. Their long driveway and the street was almost pitch black (no streetlights), but we could see Brent’s flashlight. The cow was HUGE!! I was surprised at large it was up close, it was just a regular black and white dairy cow. We offered it the bucket of food and it was very quick to help itself.  Brent called the non emergency police line to let them know about the cow. The operator asked him to describe the cow – lol. Then told him they had someone report a missing cow. We were both thrilled – it must be the same cow – what are the chances that there would be more than one loose cow wandering the streets? Well, the chances were pretty good I guess, cause it turned out that the cow we found was not the one reported missing. We could read the tag attached to its ear and it was not the same number as the missing one. They were going to send someone over to figure out what to do with the cow and asked if we’d wait with it. So there we were at 10:00 PM walking up the dark street behind this huge cow, just hanging out with it.  Further up the road one of the neighbors came out and said he thinks it might belong to the people at the very top of the street – apparently they have about 100 acres and they have 4 cows. He phoned them and it was their cow, this same cow has wandered out once before. Their son arrived a few minutes later to escort the cow home.

It was an interesting end to the evening! 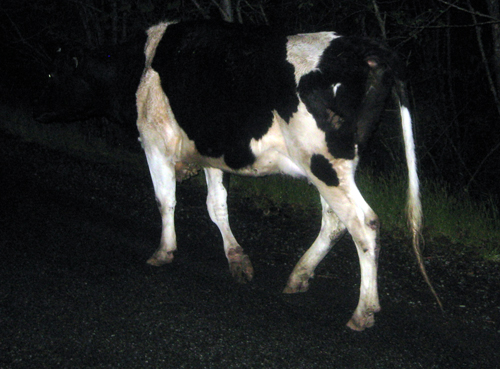