Really? Oct 9 was the last time I did an update? It feels like it was a couple days ago. Things here are going well, but even busier which I didn’t think was possible.

Last week was crazy but also very cool for all of us “first years” at the zoo. The second year students all went away for a week to go on field trips throughout Northern California, sooooo that meant we were left to look after the animals at the zoo!!! EXCITEMENT!!!! We were all assigned different animals, anywhere from 2-4 people on each animal. I was in the Primates area for the week so I was care-taking for Samantha the Gibbon and the three Spider Monkeys (Indy, Maya and Cindy Lou). Unfortunately with the primates (or at least these particular ones) there isn’t a whole lot we can do with them directly, so it was mainly just feeding and creating some cool BE (Behavior Enrichment)  to keep them busy. Depending on the animal, there were some care-takers that were able to take their animals for walks and do training sessions with them. I was envious of them. 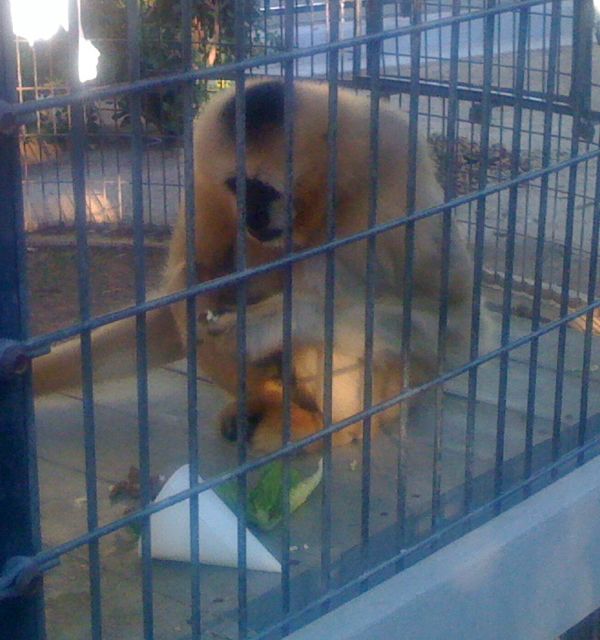 here is Samantha, she’s awesome – I just love her! She makes the coolest happy monkey sounds : ) 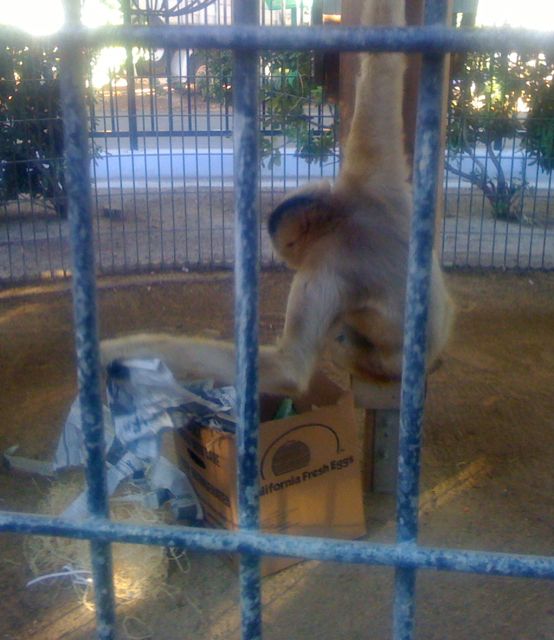 Here she is going through the box of goodies I gave her.

So, some other things that have been going on since I last posted on here:

I recently found out that I’m allergic to Soy which really sucks. It was a huge part of my diet and I couldn’t understand why I was getting so sick all the time. I had been totally addicted to Edamame and was eating a ton of it everyday, plus soy milk every morning, and soy protein shakes and bars, etc. I cut all of it out of my diet last week and have been fine ever since! (I did test it out one day and ate something with soy – sure enough within the hour I was sick). ugh, its amazing how much stuff has soy in it too, I’ve been checking labels like crazy. Dairy products don’t do so well with me either but I have discovered a really tasty Almond milk so that’s one good thing.

I did get an afternoon off a couple weeks ago and got to go to Disneyland with some of my friends from school (we are all annual Disney passholders). We wanted to see the special Halloween stuff they had there and the Haunted Mansion with the Nightmare Before Christmas in it was awesome!! Space Mountain’s new “Ghost Galaxy” was a huge disappointment, especially considering we waited almost 3 hours to get in. The Halloween fireworks show was amazing though. We had fun, even though the park was INSANELY BUSY – it was the busiest I’ve ever seen it, it was so hard just walking around there were so many people (and strollers…). 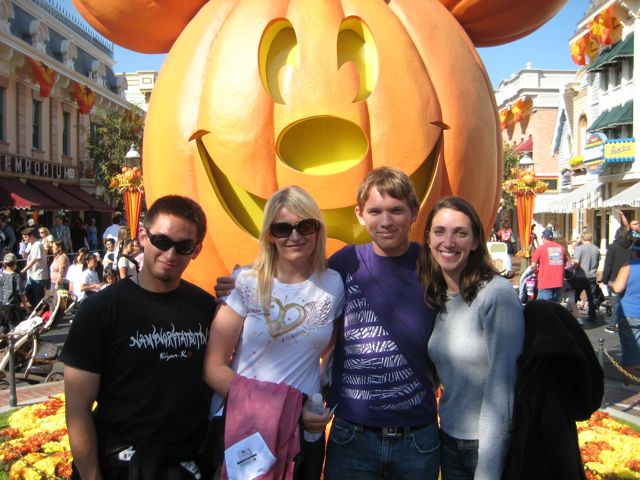 Oh, something funny did happen though. We got stuck on the Indian Jones ride, it literally broke down right when we were in front of the big rolling ball near the end of the ride!! The anamatronic Indiana Jones was dangling directly above our heads, it was a little unnerving! All the lights came on so we were able to see all their secret hallways back there and stuff and the big ball kept rolling in front of us but we were able to see how they do it. The secret has been revealed! haha! It took them half an hour to come get us out of the jeep, we had to climb down on a little ladder and then follow the cast member through the hallways to the front of the ride. The good thing was we got fast passes for whatever ride we wanted to go on next. 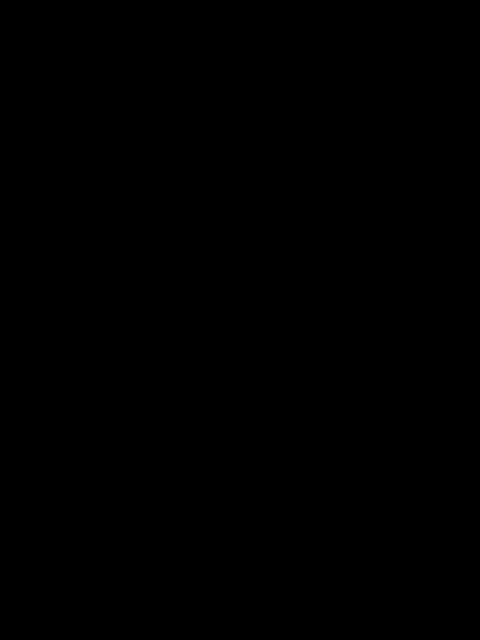 right above our heads!

Oh – I’m totally into pomegranates right now – it helps that we have a huge tree full of them in our backyard! I picked these a couple days ago: 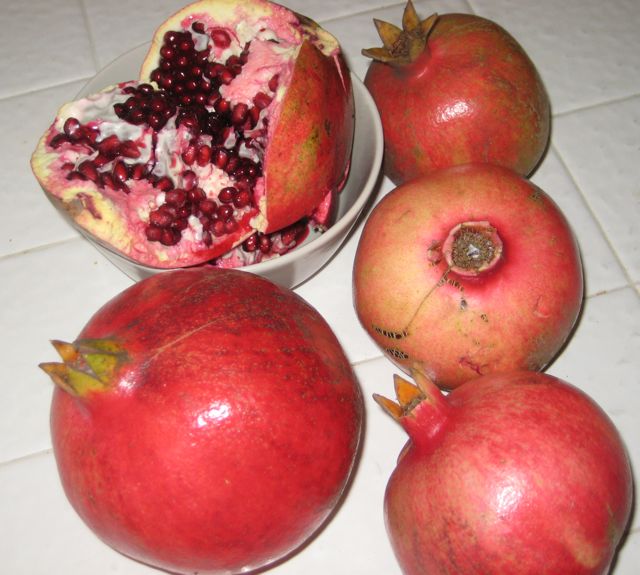 But my most exciting news actually began this week. The second year students are going away again – next week so we get to care-take on all the animals again – this time different ones! I am in Carns this week (Carnivores) so the animals that I’m assigned to are: the Hyena (Savuti), the Wolf (Lengend) and the Serval (Spitz). I’m SO EXCITED!!! I got to hand feed the serval yesterday and go on a walk with him, and today I got to meet Savuti and pet him through the fence (He is a protective contact animal). I haven’t yet met Legend close up but hopefully I will tomorrow (I’ll also get some photos of her then). 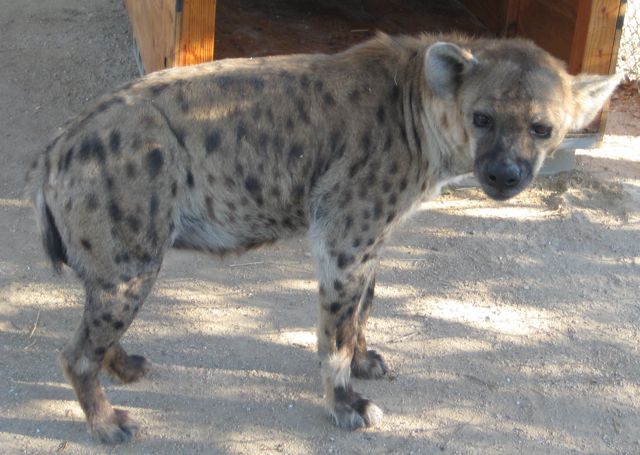 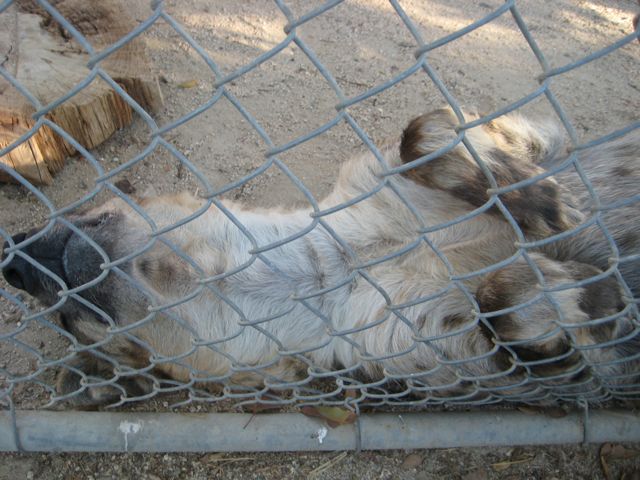 Savuti on his back waiting for more scratches – he was loving the attention! 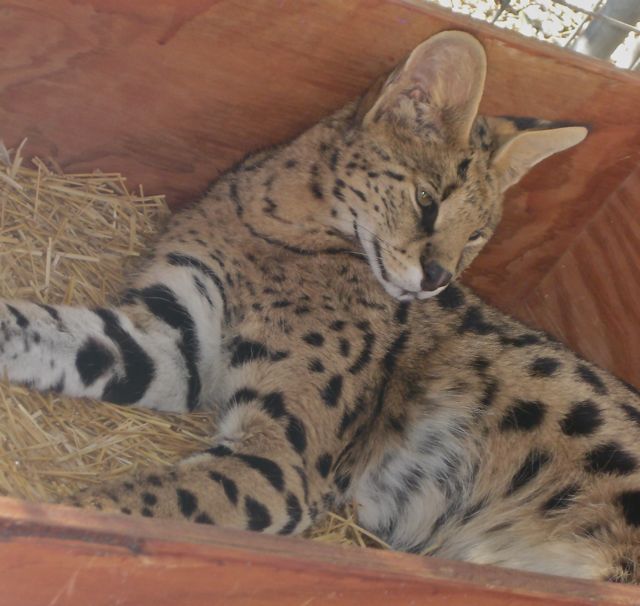