Well, all my latest attempts at trying to get Ava’s Easter photos taken this year keep getting squashed. The weather has just been awful and I really wanted to take the photos outside. It inevitably gets put off and put off, as I keep hoping for better weather each day. One day was beautiful and sunny but sooooo sooooo windy.

Today was the day, I decided that first thing this morning. It was our warmest day of the year so far, so it would be perfect to take the photos outside right? Well….I’ll tell you how the events of today panned out…. 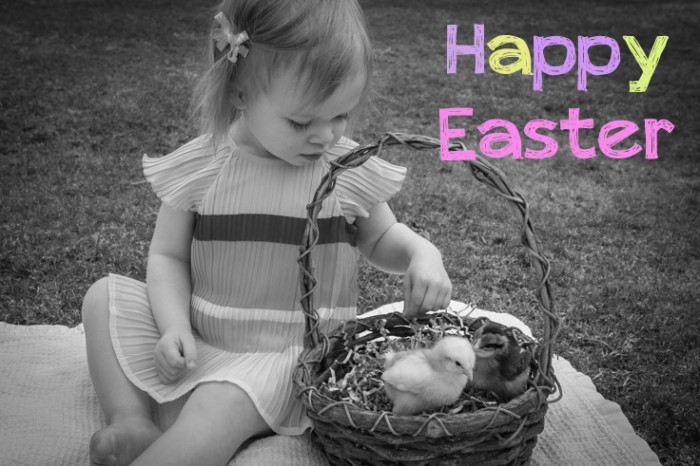 Ava and I left the house by 9:45am this morning to make it down to our local Easter Egg hunt. I was SO excited about this – her first egg hunt! We lined up with all the other parents and toddlers for the “toddler egg hunt” which was essentially just a mound of straw with a ton of plastic easter eggs thrown all over them. Not such a hunt, but good for the tiny kids I guess. As we were waiting for it to start the sky became very dark and thunder started rolling in, then lightning, then rain. Oh JOY. They let us start the egg hunt early so we all rushed in and I showed Ava how to throw the eggs in her basket – she caught on really quick and we only stayed maybe 3 minutes, tops. Then I grabbed her and we ran to the car. As we were driving home, the rain basically stopped, so we made a quick stop at the dollar store. Right as we are going through the check out, I look over at the window and there is hail coming down – HUGE hail, I don’t think I’ve ever seen it so big before. Yeah we were not going out in that, no way. Neither of us had coats since it was so warm out, plus I had parked across the parking lot cause it was so busy when we drove in. So we waited for it to die down, but then I suddenly remembered that Norman was out in the backyard when we left. Steve had already left for shows so no one was home. NORMAN!!! I grab Ava & our bags and I sprint out to the car. We were just down the street from our house so we made it home quick and by the time we did, it was barely raining again. What is up with this weather??

Poor Norman was so dazed when I finally found him in the backyard. I couldn’t find him at first and he wasn’t coming when I called. I got this horrible feeling that he was so scared he broke through the fence and was running amuck in the neighborhood! But thankfully he was just hiding somewhere. I brought him inside, dried him off and gave him a bunch of freshly washed fleece blankets to lie on. He spent the next 4 hours laying in his bed not making a peep. Poor traumatized piggy!

Soon after that our babysitter arrived and I had to load animals in the vehicle and rush out to a show. I got back late in the afternoon and Ava was napping so I took our Patagonian Cavy for a walk in the backyard. I got this great idea to hook him onto one of those dog tie out cables that we had out there from before we got our fence built a couple years ago. Bad idea, very bad idea. I had just walked away from him to get a shovel and I turn around and see him trying to back out of his harness. I drop the shovel, bolt over to him but I was too late – just as I got to him, he slipped right out and BAM – away he ran! If you have ever seen a Patagonian cavy – you will know they have very long spindly legs – great for running and jumping. They are capable of jumping 6 feet in the air from a standstill and our fence is about 6 feet tall. I had visions of him jumping over the fence and then me trying to find him out in the neighborhood somewhere. Steve would so not be pleased at all right now.

So there I was following him all over the yard trying to catch the slippery large rodent. The worst thing to do is chase him, so I had to be very calm, even though inside I was everything BUT calm. After 15 minutes of this, I went in the house to get a blanket to try to throw over him to try to catch him that way. When I got to the backdoor, I turned around to check his location and he was right behind me. He had followed me all the way back to the house. I tried to get him to come inside but he just sat at the back door. I grabbed a beach towel that was in the kitchen then I went and got his big travel crate. I took that outside (he was still sitting near the back door) and I placed it beside him and opened the door. I then had to use the towel like a matador to try to usher him into the crate. It worked! But now I had the cavy in the crate but no harness on him. That was my next task. I took him back to his enclosure and then I had to go into it with him, closing myself right into it. The next 20 minutes (and they were very long minutes) I spent trying to get the damn harness back on him. He is an extremely skittish animal with powerful legs. He kept burying his face into the far corner and then when I tried to slip the harness over his head, he’d bolt past me to the other side. It was quite the struggle but I finally got the harness back onto him. I practically fell out of his enclosure, I was so exhausted, not to mention covered in wood shavings from head to toe.

Meanwhile Ava was still napping and I was waiting for her to wake up so we could do the Easter pictures. It was now a bit sunny, a bit overcast but not raining at all, and still warm. Since the rest of the week is supposed to be crappy weather, today is my only chance. I got everything ready ahead of time – the camera was outside in the spot where I planned to have her sit, her outfits were waiting (yes outfits, I had 2 dresses and a pants outfit I wanted to change her into). Oh and the animals. We just got 2 new baby chickens a few days ago – they are about a week old and I thought it would be so cute to have them in the photo with her. I also thought it would be cute to have 2 Flemish giant rabbits – one on either side of her, and then I also wanted one of her with our mini rex bunny. I went and rounded up all the bunnies, put them in their travel carriers and brought them over to the photo spot in the wagon. Everything was ready! Ava woke up just minutes after -great timing! I changed her into the first dress and carried her outside. We took the chicks out first. She was not overly excited to see them since they reside in our living room right now so she sees them and plays with them all the time. *sigh* Then of course guess who comes on over to get in the way? Yep Norman. Then the dogs run by in the background. Then Ava finds it fun to pull all the green shredded paper stuff out of the basket. Then the chicks jump out of the basket. Then Norman comes over again and starts eating the green shredded paper. Not what I envisioned, that’s for sure! Here are the photos: 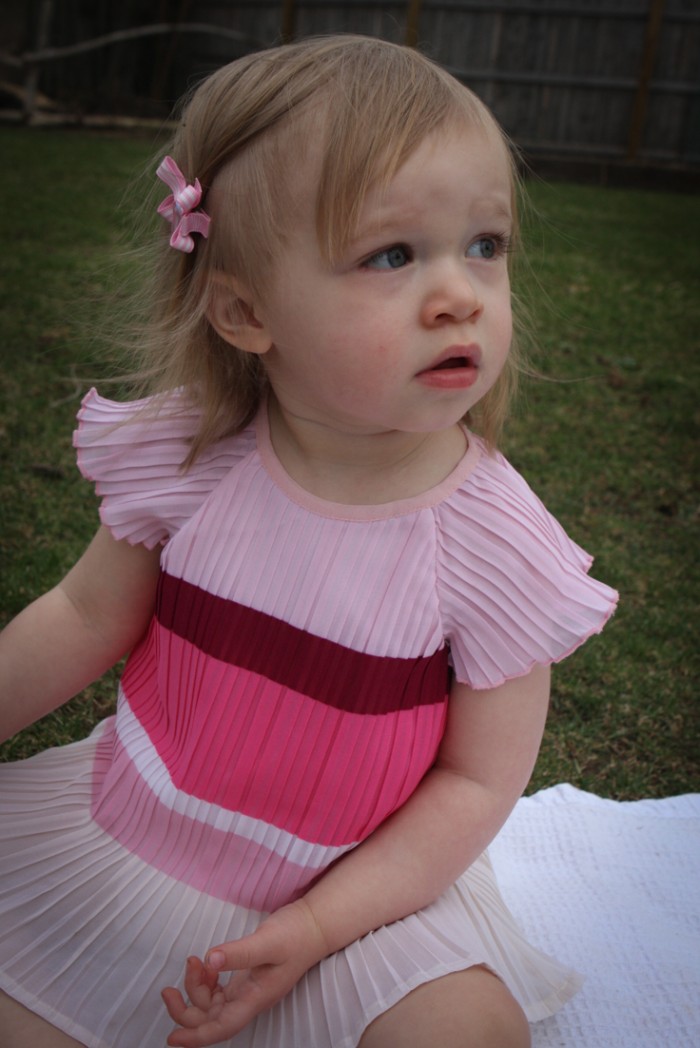 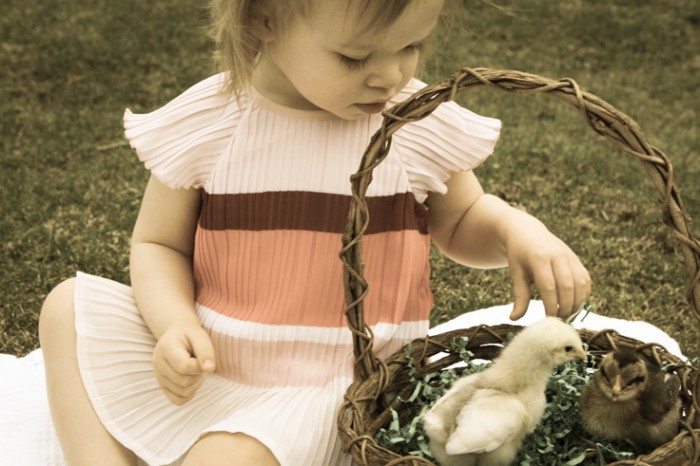 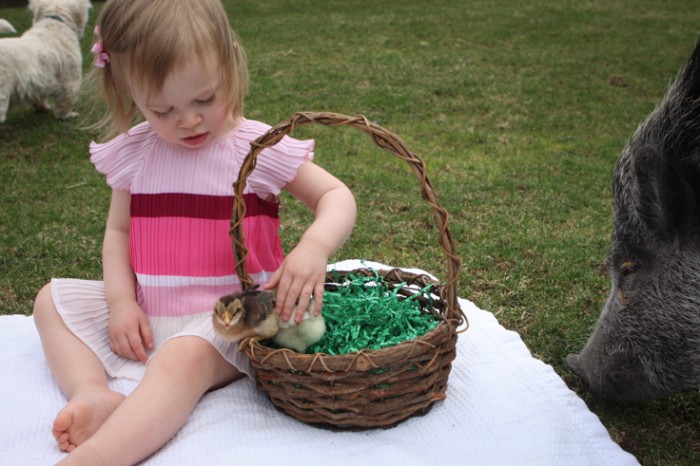 And here’s Norman… and Angus is also in the background 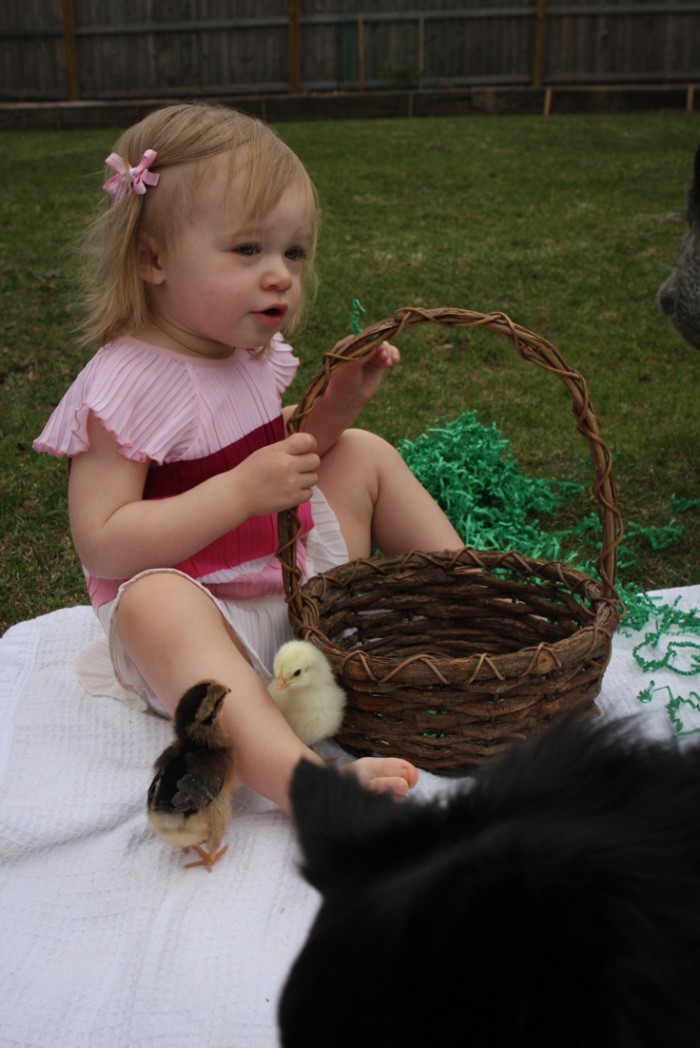 The chickens are out of the basket, all the green shredded paper has been thrown from the basket and both Norman and Moose and in the photo too. 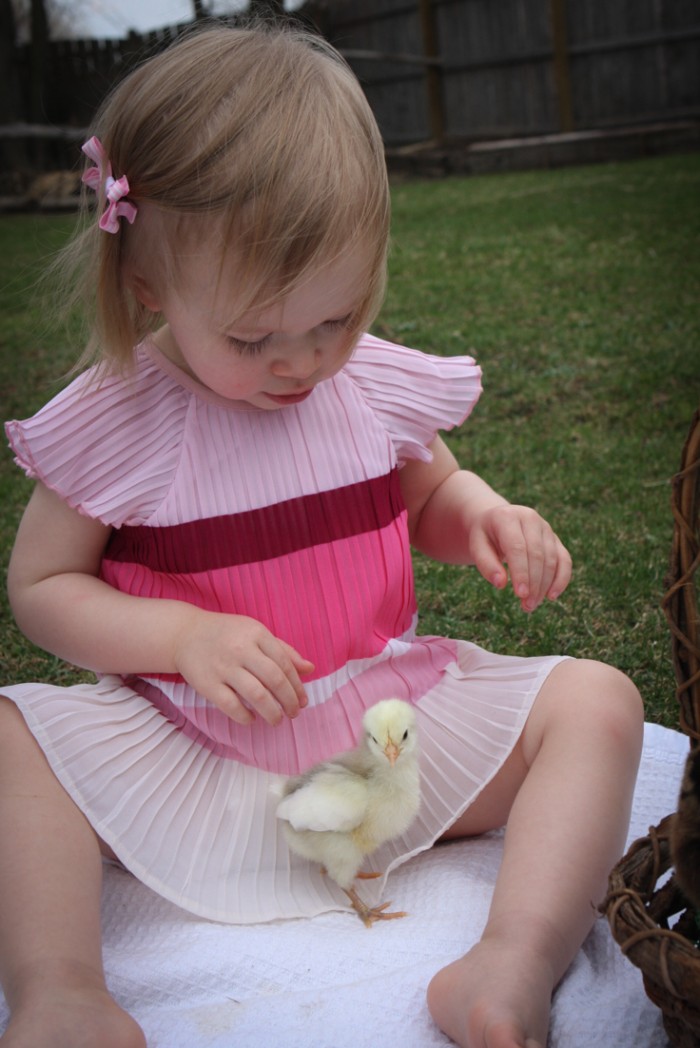 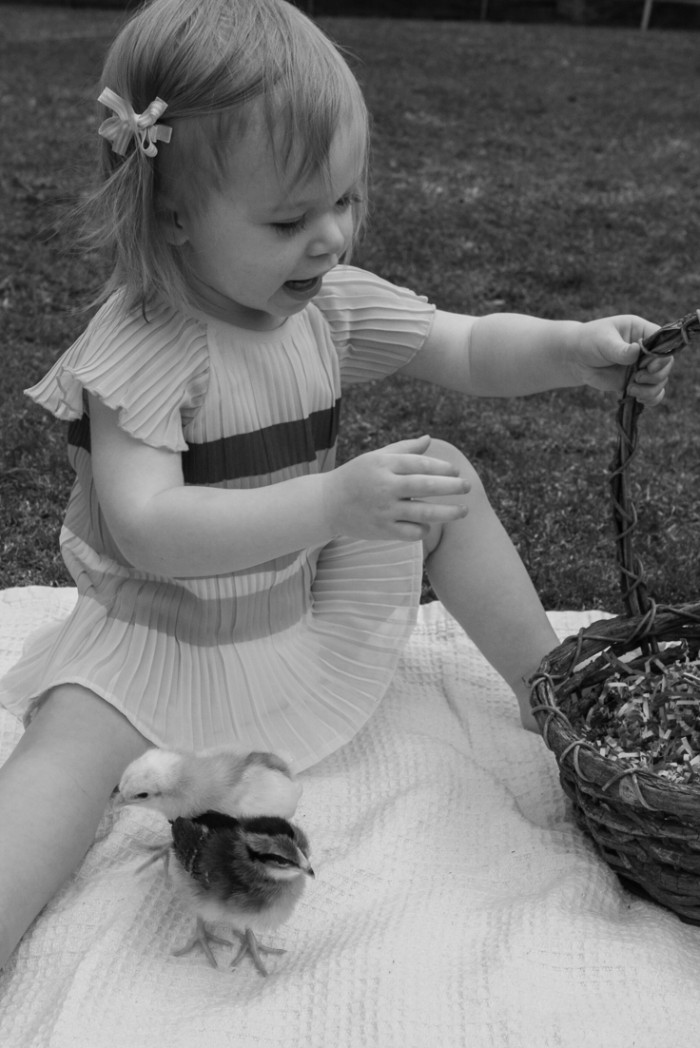 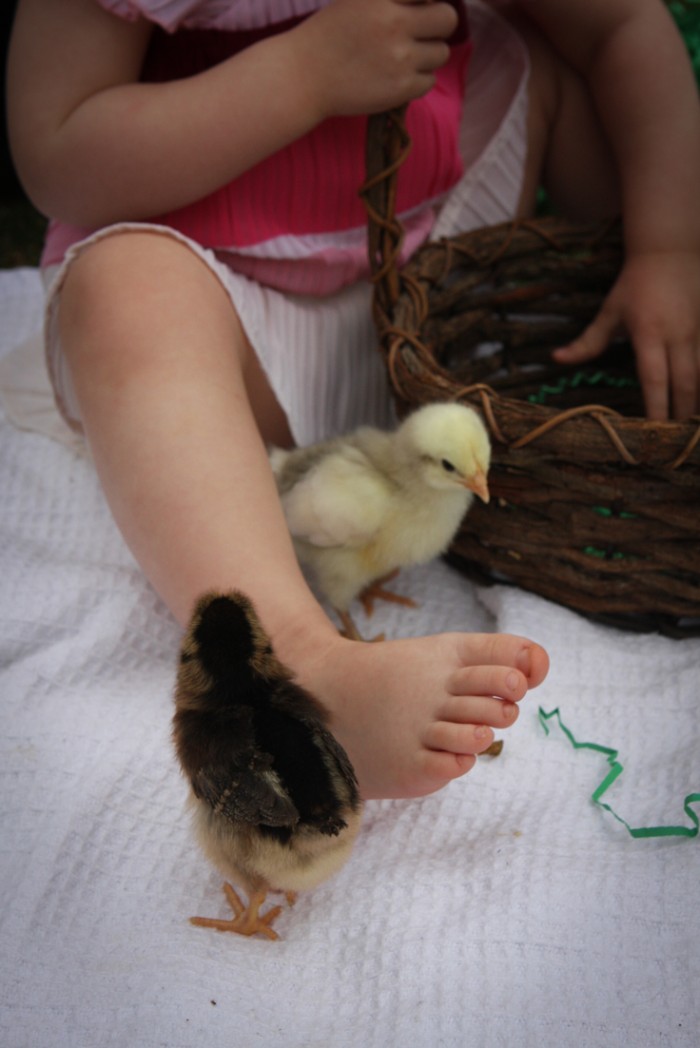 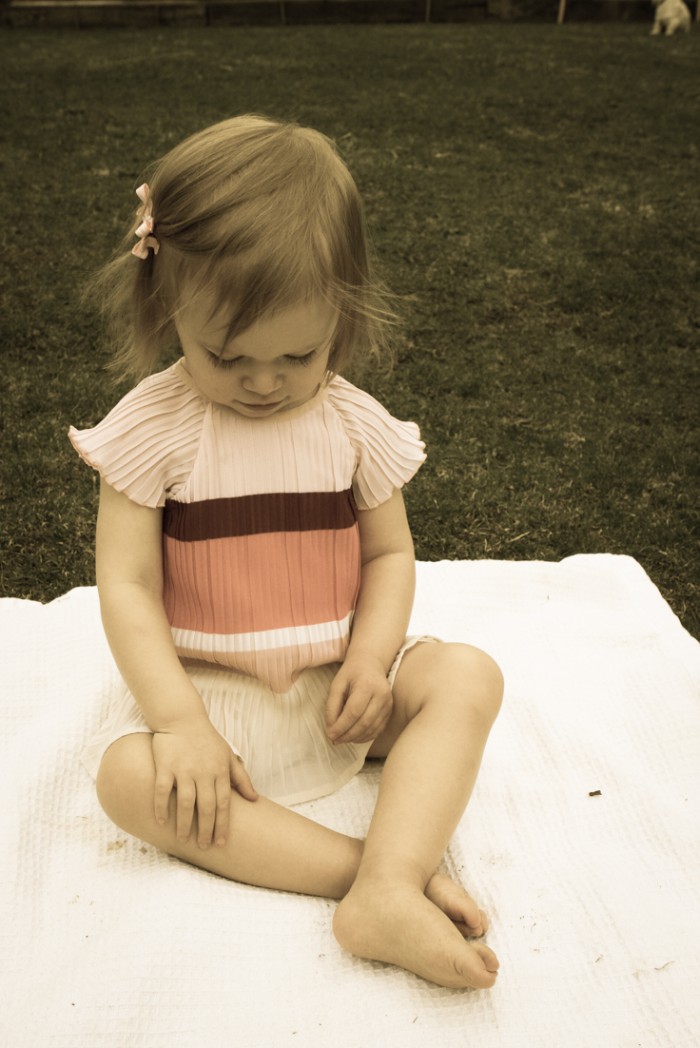 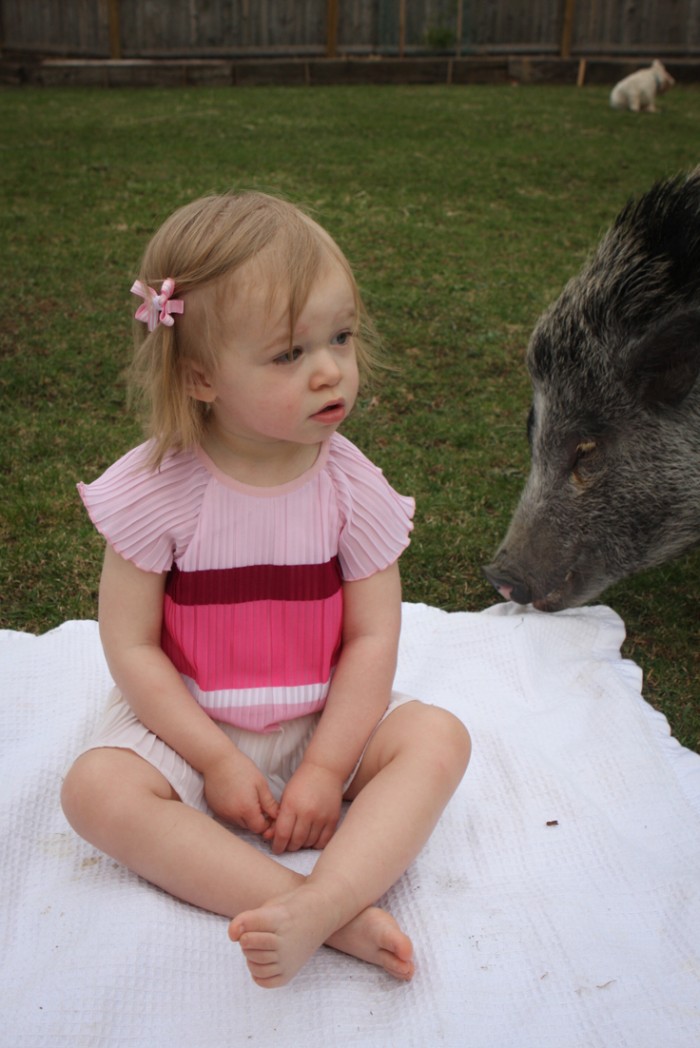 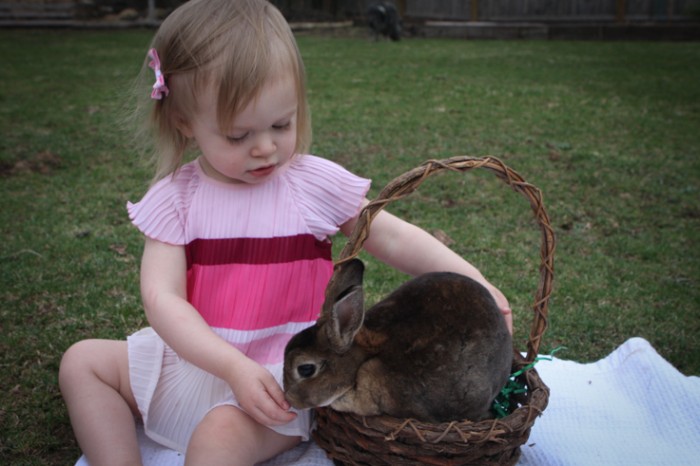 With Hank, our Mini Rex. He kept trying to jump out and she would not look at me. Not once. 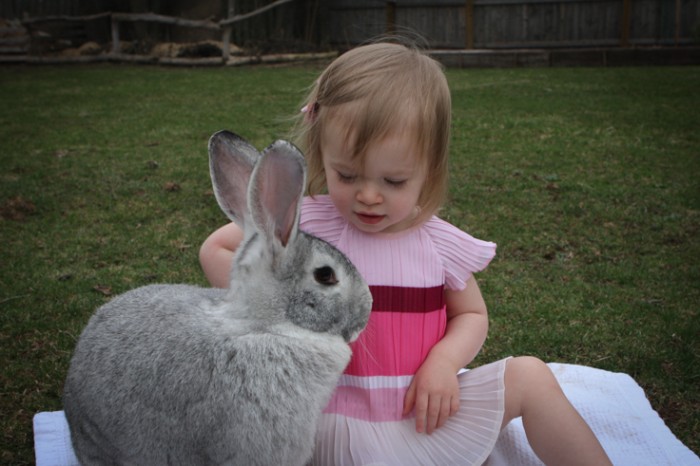 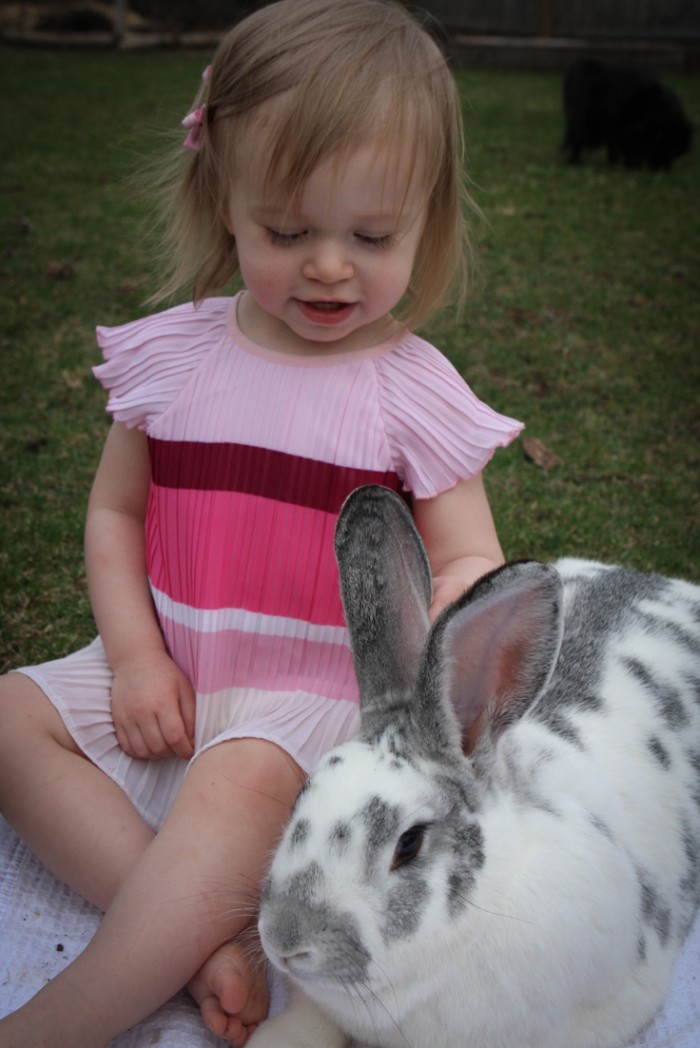 the second Flemish Giant – getting them both in the photo – yeah right! The gray one had already taken off and was way across the yard! 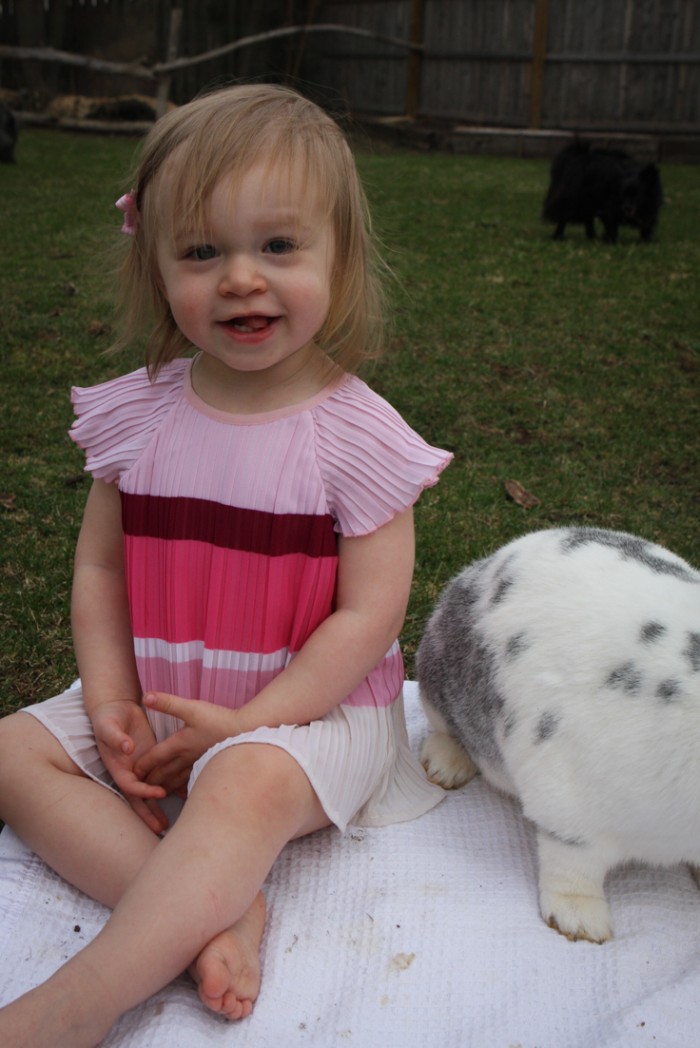 What I learned from this wonderful experience…

1. Make sure the dogs and pig are in the house while trying to take outdoor photos that do not involve them.

2. Don’t bring a white blanket outside for the photos (see photo above)

3. Don’t try to attempt to use 2 rabbits at the same time unless there is another person (and not Ava) there to help

4. Forget the outfit changes – not going to happen!

5. Have bribery treats on hand for Ava. It was so hard to get her to smile for the photos!

The great ending to this fantastic day: I put the chickens back in their travel cage, the mini bunny in his and I put everything into the wagon. I hauled them over to the rabbit enclosure then I had to chase the other 2 rabbits around trying to catch them. I finally got all the rabbits back in their home and I turn around and Norman had pulled the extra outfits out of the wagon and was nosing them around – getting mud all over the back of the white dress! UGH

And I am officially finished with taking Easter photos and with this day.