I just found out that I’ll be making a trip to Houston, Texas in January! Woohoo!!! I’m teaching 2 classes at CKC Houston – January 18 & 19. I’m so excited to be going! It will be my first time in Houston!

Here is the class project: A Pet themed accordion album 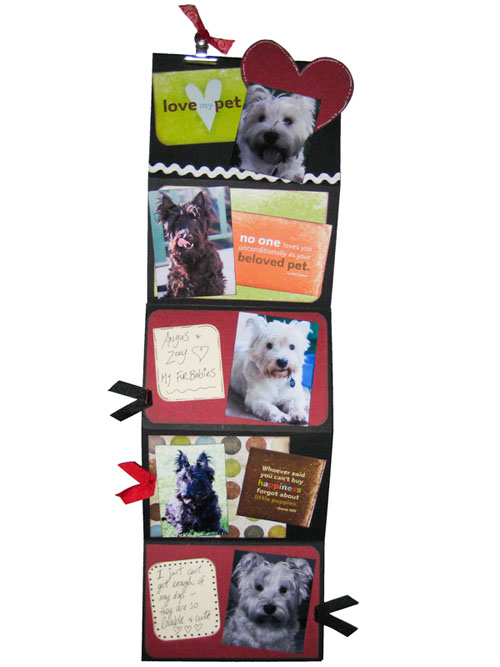 CKC Seattle was a lot of fun!! Nicole is absolutely hilarious, I had so much fun traveling with her.

We started our journey Thursday morning at 4am when she arrived at my house to pick me up. Both of us had each only had 3 hours of sleep! We made it through the border super quick (there were no other cars there – first time I’ve never had to wait in line to get through). We arrived really early at our hotel – just after 6am! Luckily they let us check in so we could drop our stuff off, then we headed over to the conference center to get ready for my first class which was at 8. 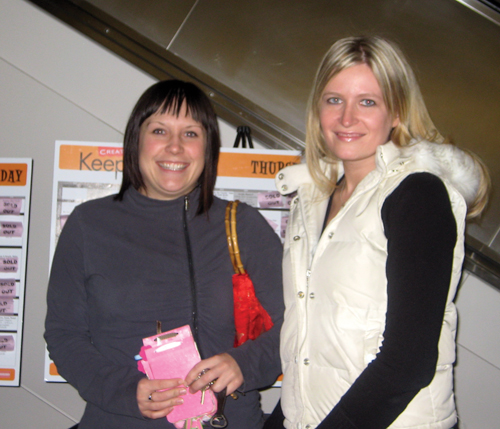 Here we are at 7am all bright eyed and excited about being at CK!!

The class went really well – it was so great having Nicole there helping plus we had a couple helpers that were assigned to the room. After it ended we wandered through the vendor fair to do some shopping and then we headed to the mall! Woohoo!!! As tired as we both were, we had geared up enough energy to shop. 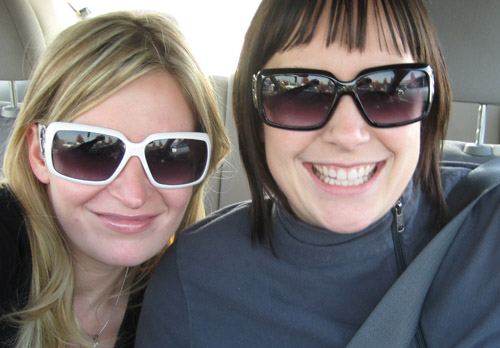 On our way to the mall – in our matching sunglasses which we got in Vegas (on a trip there for Memory Trends) last month!

However, the energy didn’t last all that long, plus we didn’t have much luck finding stuff we wanted. We stuck it out until mid afternoon then we headed back to the hotel, lay around and watched Oprah, then went back to the conference center for Nicole’s class which was at 5:30. Her class was great (Tilano Coaster class)- we had 3 helpers this time – and after it was over, the remaining kits were snatched up like hotcakes!! 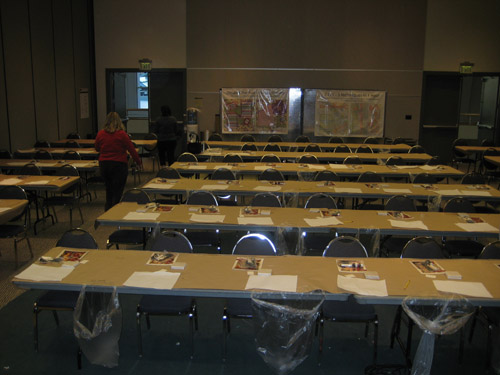 We had so much fun during her class that we suddenly got a second wind – Time to shop again!! We went to a different mall this time and shopped until 9, realizing we hadn’t eaten yet, so next stop was the Cheesecake Factory. Not the greatest experience: waiting 40 minutes to get in, food not great (mine), also finding a huge hunk of cardboard mixed in with my broccoli pieces (just lovely), and having an arrogant server who screwed up our bills and made us wait an extra 25 minutes while he fixed it. We didn’t get back to the hotel until after 11pm and we were exhausted!!!

We got about 6 hours of sleep before the alarm and wake up call woke us. It was so hard to get up, and then we dragged ourselves back to the conference center. This was my largest class yet – I’m not even sure exactly how many people were there, between 40 and 50. I’m such a shy person too, I hate public speaking, but I didn’t have time really to think about it, so I wasn’t all that nervous -surprisingly! The class went really well – what fun people we had in all 3 of our classes this weekend!

After this last class, we headed back to the hotel, had breakfast and then I had to repack my suitcase twice to get everything to fit. We checked out and left for the airport, luckily we were early cause on the freeway WE RAN OUT OF GAS!!! Yes, completely. We were just about at the exit for the airport turnoff and suddenly Nicole was like “oh no…Jess…” and she looked really panicked. Immediately I thought we missed a turnoff or something (like we had yesterday – we were very good at getting lost!).

So Nicole exclaims “I think we’re out of gas!” and here we are going around a bend in the FREEWAY with a cement barrier on our left side and NO shoulder, nowhere to pull over. So the panic sets in and luckily we manage to roll far enough ahead to where a little bit of a shoulder appeared. We literally rolled into this and stopped. CRAP 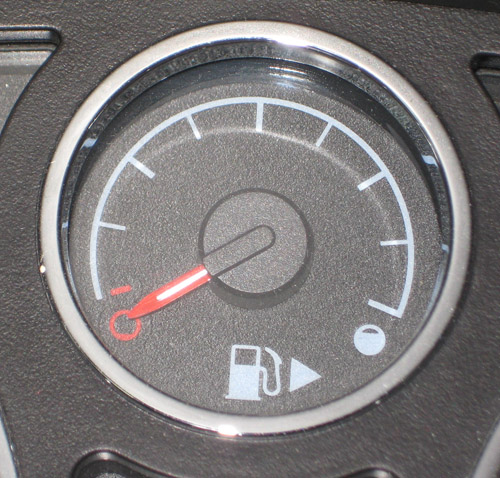 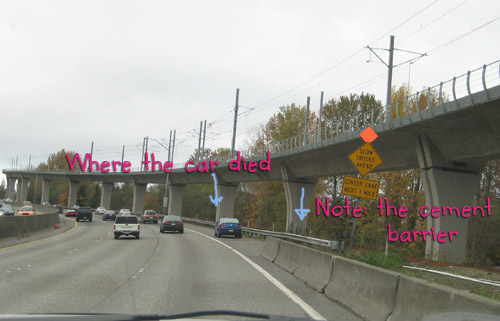 We are sitting there kinda laughing a bit – a nervous laugh like “is this really happening??” but then we’re like “what are we going to do??”. Literally 2 seconds later a cop pulls up behind us and comes to my window (cause he’d get run over if he went to Nicole’s window – the lane of the freeway was RIGHT there). He called the DOT (Department of Transportation) to see if there was an Incident Response truck nearby and there was so he came within about 10 minutes. He took me to the nearest gas station to fill up his portable gas can, then we came back to the car and he put the gas in for us. What an awesome service this is – we don’t have this in Canada. It’s a government funded service – they have trucks that patrol the highways and freeways all day looking for stalls, accidents, debris on the roads, stuff like that. They push cars out of the lanes, give people gas if they run out, move stuff off the roads so people don’t hit it. Great service. 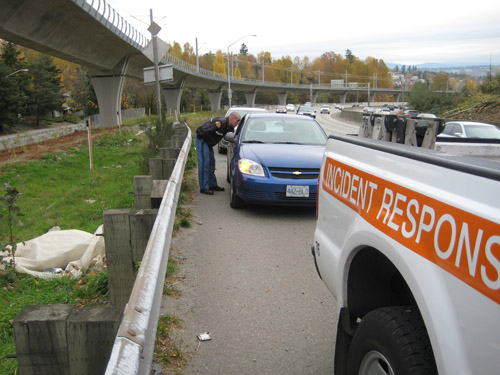 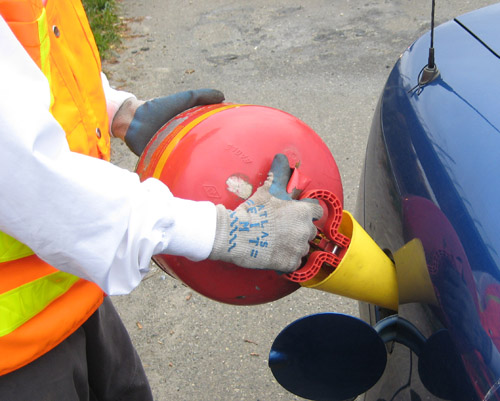 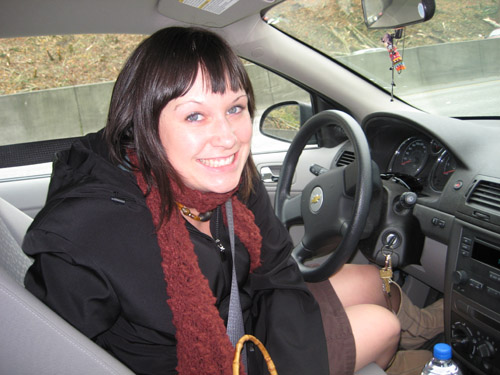 The cop told us this was the 2nd WORSE spot in the entire state we could have run out of gas in. Yeah thanks buddy, make us feel even better why don’t you?

We did make it to the airport on time though! Then after spending all afternoon and most of the evening on airplanes, I arrived in Indianapolis, my first time here – it seems like quite a nice city. Best thing about it of course is that my sister and her family are here! It’s so good to see them, my nieces are so adorable!