I thought it might be fun to participate in this challenge: 12 photos on the 12th of each month. I really wanted to do the 365 days of photos but I’m so not very good at remembering to take at least one photo a day.

So here are my 12 photos that I took on the 12th. A couple days late as I’ve been sick and it’s been really hard to even get out of bed 🙁

Sorry for the blurriness of some of the photos, they were all taken with my phone and I didn’t have the best light for some.

1. We woke up to find a lot of snow on the ground. Boo

2. A couple of our favorite things in our kitchen: mine is the Mickey hand oven glove and can you guess Steve’s favorite? Yep the storm trooper spatula!

4. A very cold pig out in the snow. Norman does NOT like the cold.

5. We went to a thrift store and Steve was thrilled to find this gem: Star Wars Monopoly. All pieces are there too!

6. While I was trying to take a picture of Zoey on my pillow, Moosie had to sneak in there to be part of the photo.

7. Picked up some of these while we were at the grocery store! One of my weaknesses is definitely orange tic tacs! But only the orange ones.

8. Vanilla Steamed milk. A new favorite of both mine and Steve’s. I recently tried one while at Starbucks because a friend of mine always gets them. YUM!!! I came home and made one for Steve to try and we’re hooked. We’ve been making them every night.

9. Mac n Cheese. I had an odd craving (I’ll blame this on the pregnancy) for this. I can’t even remember the last time I made mac n cheese. Years…..  Thankfully it was a quick craving and over right after I ate the stuff. Hopefully it will be years before I crave this again.

10. Stanley our dumbo rat out for a little play. He’s such a cutie and so affectionate.

11. Steve begged me to play Monopoly after dinner. He just loves it cause it’s Star Wars themed. So we played and I lost. Of course. I hate Monopoly. haha

12. We ended our Thursday night with our favorite show: Big Bang Theory.

* Please note: I will be away the first weekend in March, so I am extending the deadline for the February Challenges. You now have until March 3 to get any of the challenges posted so far for Year In Review contest done and uploaded into the February folder in the gallery in order to qualify for the 2 prizes this month. I will announce the winners on March 4Challenge #8

5 Things you are Loving this month!! Do a layout featuring the top 5 things you are really into this month – can be anything you can think of!
Try to get a huge number “5” on your layout (I hand cut mine cause I didn’t have any chipboard ones that were large enough)

For my layout, my top 5 things were:

* Lost (of course! This is one of the only new shows on right now – also one of the most addicting!);
* my sewing machine (I recently rediscovered the joy of machine stitching on my layouts and in mini books);
*Hummus (for some reason I am so into eating this lately)
* Sunny days and blue sky!!! It’s been so nice here not to have as much rain lately – but instead the sun has been making appearances – woohoo!
*Oranges – mmmmm…love these

Is there one specific item you just can’t seem to live without right now? Then we want to see a layout about it! It will be fun later to look back and see what was so important to you during Feb 2008. It can be anything at all, except it cannot be a person or anything living. Just an object. Examples: your Computer, your morning cup of coffee, a new shade of lip gloss… anything! You can do it for yourself or if you’d rather, you can do it for your child (what is their “can’t live without it” item right now?), you could even get extra creative and do it for a pet!

For my layout, I did it on my iPhone

This week’s challenge is just about that – “What Valentine’s Day means to you.”
For me, Valentine’s Day is the anniversary of my Grandpa’s death so I did my layout about that.
You can do it about what you are planning to do/did this Valentine’s day, about a special Valentine your child made for you, or about how you don’t celebrate at all. Try to think outside the box , also focus on journaling.

If you aren’t into Valentine’s day at all, the alternative challenge for this week is “My Job” – do a layout about what you love about your job – even if you are a stay at home mom – cause that’s a job too! 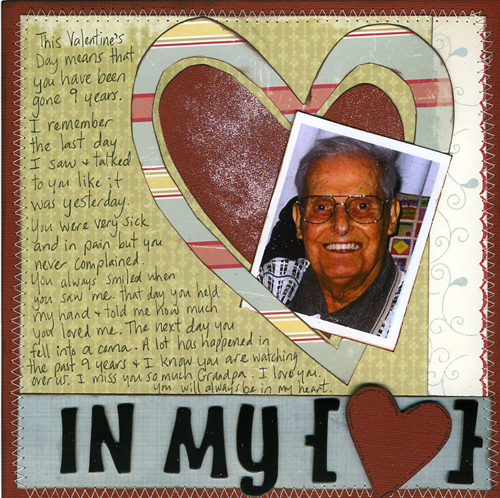 For this week’s challenge, since February has just started, do a recap of January. I chose to do mine in a calendar style – it really made me think back about what I have done over the month. I added the trips I went on, as well as day to day activities that don’t seem very exciting right now, but it will be fun to look back later to see what I did.

I am going to give you the choice of doing this challenge or another one for this week. In case you really don’t want to do a recap of January, your alternative challenge is this:

Do a layout titled “I Predict”, make some sort of prediction for a month down the road or even a year down the road. It can be a personal prediction, for a family member, or even something going on in the world. It can be serious or funny. Have fun with it!

Here is the layout I did for this week, I downloaded the calendar from this site. You are able to customize the size of the calendars which I found very helpful in order to get it to fit on my 8 x 8 page. 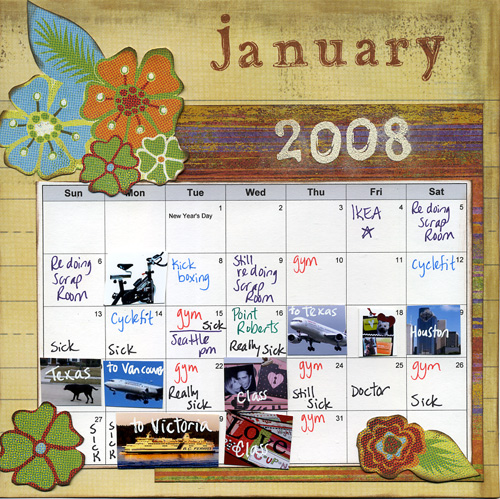 It was so hard to choose a winner for the January entries for Year in Review. Everyone did such a fantastic job on the challenges!

I decided to choose Right Now by Hockeymom – I love how she managed to get so many photos on these pages, and the white doodling looks fantastic! 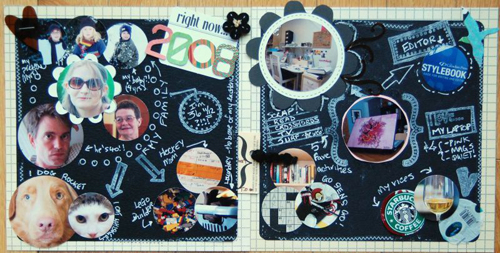 For the second winner, I put all the layouts that were uploaded to the gallery in a random generator and the following one by Brendab won! 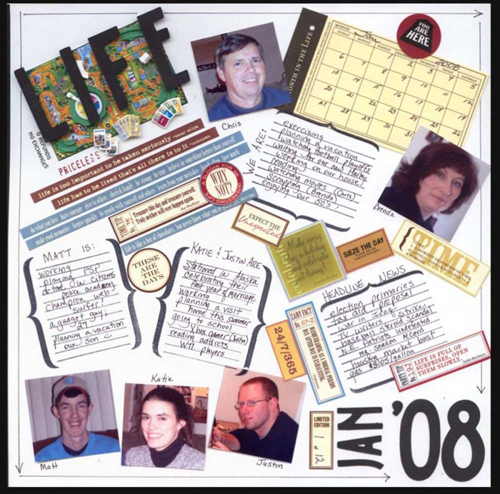 Congratulations to both of you! Can you please email me your addresses (jess.acs@gmail.com) and I will have your prize packs sent out to you right away 🙂

Is everyone ready for the February round? I’m just working on the first challenge, so watch for it soon!