It’s already been a little over a month since our wedding day, but just thinking back on it brings a huge smile to my face. Think about the perfect day that you would like to re-live over and over and that is that day for me.

I started my day out at the zoo as usual, however I had my family there so I was giving them a tour. I was fortunate enough to be able to feed Savuti, the hyena, one last time, and my family was the audience as I demonstrated all the many awesome behaviors that intelligent animal can do. Tears did come to my eyes as I petted Savuti and said goodbye to him, as that was goodbye for good.

The next few hours went by in a flash as we were running around getting nails done, makeup done, and hairdo’s done. Then we had to get everything ready to take to the wedding (such as all the favors, seating cards, etc, that I had insisted on doing myself). We got stuck in traffic on the way so we were late getting there to set up but it turns out everyone else was stuck in traffic too so that was ok. Everything worked out great. More than great, it worked out perfectly.

Some details about the wedding:

Our colors were black and white and we had a slight Disney theme added in. This is because we had our first date at Disneyland, spent many fabulous days there over the course of our relationship, went there again the day after we got engaged, and were planning to go a couple days after our wedding, and then our honeymoon the following week in Florida at Disney World. Disney is special to us, so we wanted to have a few little reminders here and there. The seating cards were shaped like mickey heads and I wrote everyone’s name on them with a white paint pen. The favors were huge (and I didn’t realize how big these cookies were going to be until I made the first batch!) mickey shaped cookies covered in black icing and our names were written on them with white icing. Our cake was 3 tiers and on the bottom and top tiers there were tiny black mickey heads randomly piped on with icing. We had a custom made cake topper that I got on etsy (http://www.etsy.com/people/buttoneyedteddybear) which had us on it 🙂  That would be us and the dogs, but just Angus and Zoey. When we ordered it, we didn’t have Moose yet.

For the table numbers, each table had a photo of one of our pets with the number in the photo and the photos were all in black and white. It took us longer then we expected to get all those pictures! Especially when we were trying to get a picture of a wiggly puppy who does not want to sit still at all!

In addition to the cake, we also had cupcakes! Both large and mini sized ones in our favorite flavors: snickerdoodle and vanilla white chocolate chip. Thankfully several of my good friends helped me bake all these (and all the cookies), as I would not have been able to do it all on my own. We baked hundreds of both cookies (mickey shapes and small hearts) and cupcakes.

My sister was my matron of honor and her 2 daughters were my adorable flower girls! Their dresses actually looked a lot like mine which was so cute! 2 of my best friends that I met in EATM were my bridesmaids. Steve’s 2 brothers were his groomsmen (his oldest brother was his best man) and a very good friend of his was his other groomsmen. We were married by one of our best friends, who was also one of our classmates! She did a great job and I can’t imagine having it go any other way 🙂

Our 3 dogs were in the wedding too. Angus wore a little tux with a bow tie, Zoey wore a strand of pearls that matched the ones  I was wearing and Moose just had a little white bow tie. My mom made 2 little ring pillows and Angus and Zoey each had one tied to them with our rings. They were so well behaved throughout the ceremony, I was so so proud of them! We even took them into the photo booth afterwards to get some pictures with them! Speaking of the photo booth, I’m so glad we had them there as it was a huge hit! Steve and I only went to one bridal fair thing and the Photo Booth was the only thing we liked there, I highly recommend them: http://www.allstarphotobooth.com/

Everything was awesome though, all the fabulous toasts and speeches, the food, the music, everything. My sister presented Steve and I each with a pair of mickey ears (bride and groom) to wear on our honeymoon – really really cute! Then my oldest niece completely blew everyone away when she got up and sang 3 Disney songs. She’s only 9 years old but she’s been singing since she learned to talk. Her voice is amazing, and you can’t truly understand that until you hear her. Jaws were dropped all over the room and I still have people tell me how amazing she was.

It will be a day I will cherish for the rest of my life. Thank you to everyone who helped make this day possible. : ) 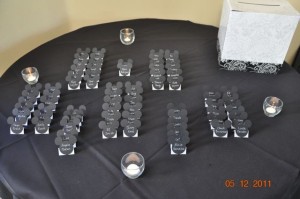 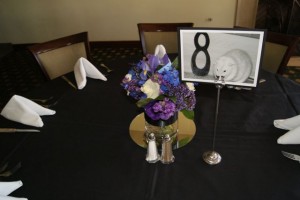