Yep, that is exactly what I am going through right now: a complete nightmare.

The week started off well – last weekend my good friend Jen and her husband came from San Francisco for the weekend and we all went to Disneyland for the day. That was awesome! But then things went downhill.

It started off with the air conditioner leaking and dripping through the doorframe in my bathroom. So of course our landlord couldn’t get anyone to come look at it for a couple days so we had to have the air conditioning off – which was a nightmare all on its own. And it had to be when this area is going through an unexpected unusual heat wave. nice.

After 2 very long very HOT nights of not sleeping well, I had to go to the college yesterday morning to register for my classes and when I got home there was water (a lot of it) dripping through the ceiling in the family room. There was about a 6 foot by 2 foot section of the ceiling that was soaking wet and water droplets continuously falling from it onto the carpet. I called the property management company right away and said it was an emergency – that they need to send someone NOW. 3 people rushed over and within half an hour, a quarter of the ceiling was completely missing. They finally got a plumber to come by an hour later and an air conditioning guy like 4 hours later and when they finally figured out the problem it was about 9:00pm. We had spent ALL day just hanging around waiting to find out what was going on. The huge leak was from a small leak in a pipe that was upstairs in my bathroom. The other leak was from the air conditioner – both were completely separate from each other and just a major coincidence that they happened simultaneously.

Since there was so much water damage, they called in a company to come dry it so we have these huge LOUD dryers all over the place and they have to stay on for 4 days straight. And we still don’t have air conditioning and might not for several days. HOWEVER, the best is yet to come. Today we got eviction letters (me and my 3 roommates who haven’t even arrived yet). We were told that the house has been deemed unlivable and we have to get out ASAP. Well actually the other 3 girls were told that they aren’t even allowed to set foot in the house (and they are supposed to move in on Sunday- have their moving companies booked already). It states that since I am here, I am allowed to stay for a few days until I can remove all my belongings. OMG

Where are we supposed to go? It’s not even like I can easily find a place to stay in the meantime until we find a new house – as I come with 2 dogs and a guinea pig. This is a complete disaster, but 2 of my roommates are coming tomorrow and we’re going to try to find another place to move into ASAP. Crossing my fingers….

here’s a couple pictures of the disastrous mess.. 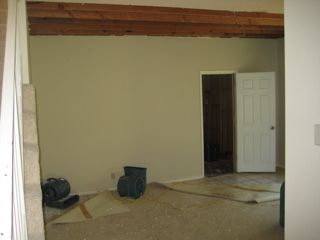 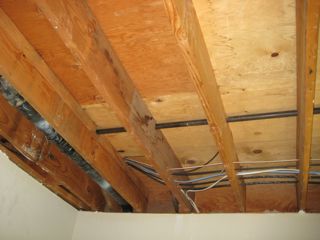 the ceiling in the living room 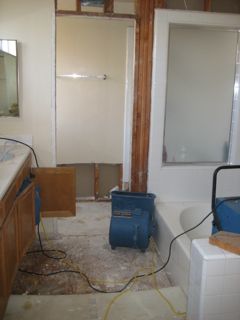 and my bathroom. When I went into it to take this picture it was like 200 degrees in there

Anyway, thought I would put an update on here while I still have internet. Time to get out of this hot house – heading to the dog park with the pups!